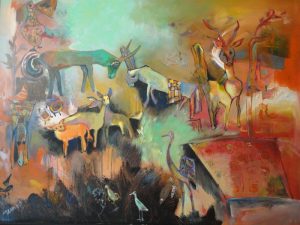 Frankfurt am Main – The Southeast Asian country of Vietnam is a rising force in geopolitics, economy and culture. Vietnamese food, as generally known, has gained enormous popularity in Europe in recent years. Whoever gets acquainted with the Vietnamese culture will soon discover that there is a lot of interest in the country – especially Hanoi and Saigon (officially Ho Chi Minh City), two areas that offer a well organized art scene.

Nguyen Thi Mai is an artist who combines archaic and modern elements in an art form that can be called spiritual and naïve. We had some questions that she kindly answered.

ART DEPESCHE: At first, please give us some short overview about your education as an artist…

Nguyen Thi Mai: I am a naïve artist, which basically means I have no formal art education. I got started in art in 2004 when I joined an art club in Hanoi at the Hanoi Friendship Cultural Palace under the tutelage of Mr. Tham Duc Tu for less than a year.

Later on in 2010, I briefly learned about the technique of lacquer painting from Mr. Nguyen Huy Hoang, a lacquer artist in Hanoi.

ART DEPESCHE: Your work often makes a very archaic impression, resembling tribal arts and old cave paintings… From where do you get your inspiration?

Nguyen Thi Mai: I am inspired by the various tribes around the world, not only in the ancient times, but even in the 21st Century, there are still tribes living in different parts of the world, even in Vietnam.

I am inspired by their pure and simple lifestyle, which is vastly different from our modern 21st Century cosmopolitan lifestyle.

My art is about the search for balance and harmony. While I am no Luddite, I believe there should be a balance in everything we do, even in progress and development.

ART DEPESCHE: You often paint animals. Surely these have a special meaning…

Nguyen Thi Mai: I find animals to be very beautiful and I hope that human beings can co-exist peacefully with them.

ART DEPESCHE: In my eyes, there is an obvious similarity to classical Western modern arts. Would you also say, there is something typically Vietnamese in your paintings? If yes, in what sense?

Nguyen Thi Mai: Technique wise, lacquer painting is a traditional Vietnamese art, so it cannot be mistakenly for classical Western modern arts (although I have given it my own unique style with the finishing).

ART DEPESCHE: There is a special series called “Vietnamese Zodiac Signs” – please tell us more about this.

Nguyen Thi Mai: The Vietnamese zodiac cycle spans 12 years, with each year represented by an animal: mouse; buffalo; tiger; cat; dragon; snake; horse; goat; monkey; rooster; dog; and pig. This is very similar to the Chinese zodiac cycle, except the Chinese replaced the cat with rabbit.

In this series, I have combined animal heads with human bodies in the paintings. This is a reflection of my desire for human beings and animals/nature to co-exist in peace and harmony.

ART DEPESCHE: You also did a number of silk paintings – a technique that is not common in Western countries. What is the most interesting about this way of painting?

Nguyen Thi Mai: The interesting aspect is the softness and fragility of the medium. Creating art on a piece of delicate material like silk requires a soft touch that can be extremely demanding. But the finishing is worth the hard work as a silk painting evokes a sense of subtlety and refinement that is unique to this medium.

ART DEPESCHE: What are your favorite contemporary artists from Vietnam? Who do you think should we know about in Europe?

ART DEPESCHE: What were your most important exhibitions? Did you already have exhibitions outside of Vietnam?

Nguyen Thi Mai: All my solo exhibitions were done in Vietnam, in Hanoi and Ho Chi Minh City.

I also participated twice in the Beijing International Art Biennale, 2015 and 2017.

ART DEPESCHE: Are there any catalogs or books featuring your work available?

Nguyen Thi Mai: I self published a book back in 2011 in Hanoi. Obviously, work from the latter part of my artistic journey was not included, especially most of my lacquer work.

Besides that, two of my paintings, one acrylic and one lacquer, were featured in the February 2017 issue of ArtAscent Art & Literature Journal, a US-based art journal.

ART DEPESCHE: Please tell us something about current projects. And what are your plans for the future?

Nguyen Thi Mai: I have stopped doing lacquer painting and switched back to acrylic since 2016. What I am trying to do is to transfer what I have learned from lacquer painting onto the canvas using acrylic, technique wise.

I plan to continue down the path I have always trodden: seeking balance and harmony through my art. As for what exactly will I be doing, it depends entirely on my emotions ….

ART DEPESCHE: Thank you for the interview.

(This is an English translation. The original article first appeared on art DEPESCHE on 11/10/2017)